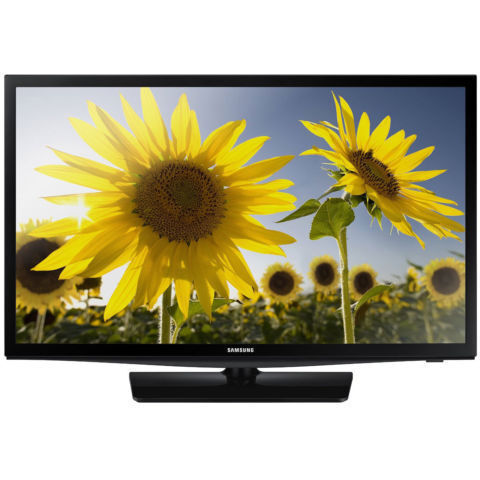 These Samsung 20-inch to 29-inch television sets allow you to watch your favorite shows and play video games in 720p or 1080p high-definition through ports like an HDMI port. At this resolution, you can clearly see the small, granular details of the image on screen.

LCD, which stands for liquid crystal display, is a type of television set produced by Samsung. An LCD screen is composed of tiny crystallized liquids that can be induced to form images when an electrical current is applied. LED, on the other hand, stands for light-emitting diode, a type of semiconductor that produces light.

Many types of television sets combine LCD and LED technology together. LCD technology is applied to the screen itself, while LEDs are used as a lighting source. LCD televisions typically require an extra light source, because liquid crystals do not emit light on their own. Instead, an LED backlight provides the necessary illumination. This type of television set is usually identified as an LED-backlit LCD television. Sometimes they are called LED televisions. LEDs are not the only type of lighting source.

Less commonly, another type of technology called cold cathode may be used in place of LEDs. However, LEDs generally provide a wider color range and better dimming options than cold cathode technology. Some television sets may have different LED "zones" arranged behind the screen. These zones can switch off around particularly dark parts of the image. This creates a greater contrast between blacks and whites.

What is a smart television?

Samsung smart television sets are integrated with internet and interactive features, allowing you to use a variety of online applications on the devices. It is also possible to download a range of video games and movies directly onto the Smart TV itself, since it comes equipped with a sizable amount of internal storage. With the internet streaming interface, you can browse the internet and stream both music and movies through an internet connection. These Smart TVs offered by Samsung provide access to their application hubs, where a large number of applications are already downloaded to the system and ready for you to use.

Are Samsung televisions equipped with any additional ports or interfaces?

Yes, but it depends on the television model you have purchased. Most Samsung models are equipped with full access to Bluetooth capabilities, allowing you to perform a wide range of wireless tasks. A small number of these devices include headphone jacks that provide you with the means of hooking up a headset directly onto the display. The Samsung models that come with internet capabilities include two USB ports that allow you to transfer music, movies, and other files to the television set with a USB device, as well as HDMI ports, allowing you to plug in video game consoles and computers. These models are also outfitted with wireless network access, allowing you to use the device to browse the internet or stream movies without needing to hook the television set up to your internet modem.