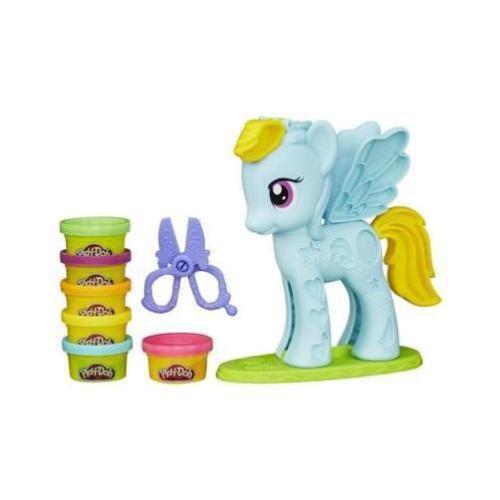 Play-Doh has been a popular product for childrens arts and crafts since the 1950s as this modeling compound is fun, easy to use, and encourages kids to express their creativity in various ways. The brand has added My Little Pony to its product collections, combining the hands-on aspect of Play-Doh with the Hasbro entertainment franchise and its characters, including Rainbow Dash and Twilight Sparkle. With the components in these kits, kids can play with the colored clay to create My Little Pony characters and toys.

What is Play-Doh made of?

The exact ingredients of this clay substance have not been disclosed to the public to protect its secret recipe from being duplicated by competitors. Play-Doh contains water, salt, and flour, but it should not be ingested. It does not contain peanut or milk byproducts.

Is My Little Pony Play-Doh safe for all ages?

My Little Pony play sets state that they are suitable for children 3 years of age and older. Because some of the components of these kits are small enough to ingest, it is important to take care when allowing a young child to play with these toys.

What does a My Little Pony Play-Doh kit contain?

The contents of a My Little Pony Play-Doh play set may vary. These kits typically include a featured pony, such as Rarity, Rainbow Dash, Pinkie Pie, or Twilight Sparkle. They also may have between four and 10 colored Play-Doh molding compound cans and other accessories and toys, such as Play-Doh scissors and cupcake party supplies.

How do you use the Make N Style Ponies kit?

This kit contains various toys and molding clays to provide kids with a way to show their creativity with the pony characters that they love.

How do you moisten Play-Doh when it starts to dry?

If you preserve a clay creation for an extended time or leave it out by mistake, it may dry out. To return the material to its malleable state, slowly add a drop of water at a time while kneading the dough gently. If it is very hard, you can wrap it in a damp paper towel, place it back into the sealed can, and let it sit overnight.

Content provided for informational purposes only. eBay is not affiliated with or endorsed by Play-Doh, My Little Pony, or Hasbro.