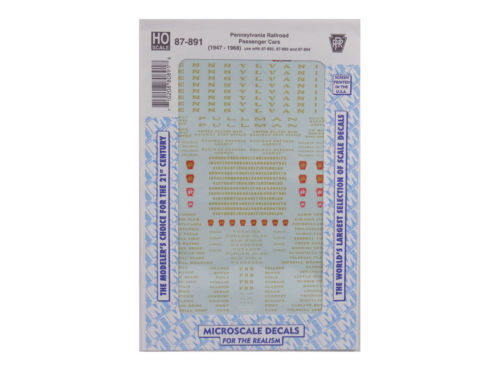 The HO scale is a traditional formula for building model railroads. Many decals are produced to HO scale to decorate each of the locomotive cars designed for a train set. Those who build HO models and trains need to know what is available before making a purchase.

How do these stickers work?

HO railroad decals are stickers that can be placed on the sides of model train cars. They create a look and style to complement other types of locomotive items. However, HO scale sets can also use various stickers to create looks for the landscape surrounding the train and the locomotive area.

For example, many types of decorative models, such as trees and trucks, can come in a model set. These HO models must either be painted or decorated with stickers to make them look realistic.

In what years were these stickers produced?

There is a multitude of different production runs for decals created for HO builds. For example, HO scale stickers were initially produced as early as 1910. HO decals from this first run lasted until about 1944, when their designs were changed slightly to indicate new looks in the HO scale.

From 1945 to 1969, there was another production run of these stickers for HO cars. After 1969, HO changed again and required a different type of production. These changes were mostly minor but did reflect different HO scale modeling ideas and orders. The last two runs of HO decals were from 1970 to 1987 and from 1988 to the present.

How large is the HO scale?

While the exact ratio has changed slightly over the years, the proportion for HO is currently 1:87. This results in a reasonably small scale that lets builders create sprawling sets. Typically, the rails for each car are about 0.65 inches apart and have 4-foot trails. The name indicates that this ratio is half of the O scale, another modeling choice for those who build railroads.

The decals for this scale are designed to fit on the sides of the cars used on each set. As a result, the graphics are often tiny and precise. It requires a careful approach to peel and adhere each sticker to the side of each spot on a total model.

How are these scale stickers graded?

Several grades of these stickers are on the market. They are graded on a scale from C-10 to C-6. C-10 indicates a sticker that is in mint condition. It probably hasnt been applied to a car or was carefully removed from one before selling. C-9 indicates a factory-condition new sticker that may have a few minor imperfections. These ratings go all the way to very good, which means a sticker may have been used but suffers from no significant issues.