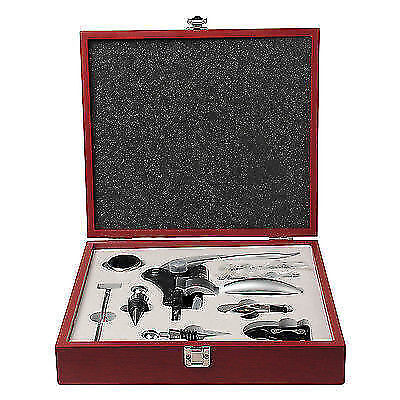 Corkscrews and wine openers are tools made of wood, stainless steel, plastic, and other materials, to remove corks from bottles of beer, wine, and other liquids. The most basic corkscrew consists of a handle attached to a spiral metal rod that is inserted into the cork to pull it out. Wine and bottle openers come in various styles and sizes, and even electric versions

How do you open wine with a corkscrew?

How do you use a winged corkscrew?

After removing the foil, raise up the winged arms of the opener so that the spiral screw part is completely extended from the bottom. With the bottle in your other hand, insert the corkscrew. Once it is securely inside the cork, use the knob on top of the tool and turn clockwise. When the screw is almost all the way in, the wings, or arms, of the opener should be stretched out. Using both hands, pull the wings down. This action will leverage the top out from the wine bottle.

Who invented the corkscrew?

Although the first mention of the corkscrew was made in 1681, there is no knowledge of the original inventor. Historians believe that the design for the opener was inspired by a similar tool that removed stuck bullets from guns. Samuel Henshall from England held the first known patent in 1795. A wide variety of different wine bottle openers were created and patented in North America and Europe.

What is an electric corkscrew?

This bottle opener tool pulls out and releases corks on contact using energy from batteries. The electric corkscrew is placed on top of the bottle and at the push of a button, the cork comes out. There are battery-operated models and rechargeable ones that come with bases. Users should make sure to keep them charged or ensure that new batteries are not needed before needing to use it. These tools are small enough to be stored when not in being used to open wine, beer, and other corked beverages.

What is a wine key?

A wine key is also known as a sommelier knife or waiters friend. Karl Wienke of Germany is credited for its invention in 1882. It is a bottle opener housed in a body that folds up just like a pocket knife. The design includes a lever that be rested the top of the bottle for more leverage when removing the cork. Some sommelier knives have two steps on the lever, and sometimes a bottle opener. A small blade in the handle can be used as a foil cutter.