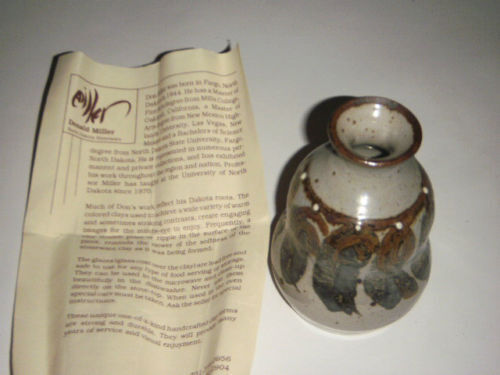 What is University of North Dakota Art Pottery?

Dean Babcock surveyed North Dakota’s clay deposits and learned that the state had deposits of high grade potter’s clay, some of unusual purity. Babcock sent clay to several American art pottery concerns, and American Art Pottery made from North Dakota clay made its debut at an art exhibit at the 1904 St. Louis World’s Fair. In 1910, a ceramics department headed by Margaret Kelly Cable, an experienced American art potter, was established at the University of North Dakota. Cable and her students immediately began making bowls, brick, jugs, jars, decorative pieces, tile, tea and tankard sets, plates, trays, tobacco jars, vases and more. By 1913, the UND Ceramics Department had made a name for itself on the American Art Pottery and crafts scene and established a distinctive seal. The university has since trained many giants in North Dakota pottery and crafts, such as Charles Grantier and Laura Taylor.

Which clays are used in Dakota art pottery?Which color patterns of American Art Pottery and crafts are available?What are some Dakota potteries?Content provided for informational purposes only. eBay is not affiliated with or endorsed by Dakota Pottery.